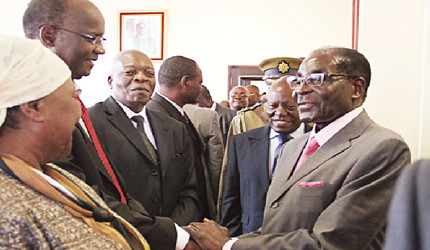 Jonathan Moyo has reportedly apologised to President Robert Mugabe after accusations he was causing divisions in Cabinet and Zanu-PF. Mugabe’s spokesperson, George Charamba, last night confirmed the meeting between the president and Moyo at State House on Monday evening, but declined to give details of what transpired.“Yes, they met – the president, minister of State in the President’s Office Didymus Mutasa, Professor Moyo and the fourth person whom I cannot name because he is a member of the intelligence,” Charamba said.“But I don’t know what they discussed. Even if I knew I would not, never, ever reveal to you as the three named people are my principals.”But impeccable sources said Mugabe and Moyo hammered out an amicable solution, with a number of changes expected to be made soon, both in the minister’s conduct and at the state-controlled newspapers where heads are expected to roll.A solution was reached after Mugabe made a number of accusations against Moyo, among them that he was literally running the state-controlled media. The meeting saved Moyo from the chop which was reportedly being pushed for by hardliners in Zanu PF. Efforts to get a comment from Moyo were in vain at the time of going to print late Thursday as he was not answering his mobile phone.But the sources insisted Moyo had apologised to Mugabe for his “misdemeanours”.“During the meeting, a number of issues where raised by His Excellency, which include the appointment of anti-Mugabe journalists, abuse of the state media to attack Moyo’s political rivals and the manner in which he was running the show there,” one of the sources said.Although attempts to get a comment from the minister were fruitless as he was not picking up his mobile phone, while his secretary said he left the office early, the sources said Moyo asked for forgiveness from the president and pledged to work for the party and government in a better way.“The president was not pleased with how some journalists were appointed to the state media, especially editors. Some of them previously attacked the president by publishing false information,” the source added.“In most of these appointments, there were no security checks done, hence some wrong heads were appointed to lead the papers.”During the funeral wake of former Zanu PF minister and politburo member, Nathan Shamuyarira last Friday, Mugabe let loose his attack on Moyo, accusing him of sowing seeds of divisions within the party and hiring anti-state journalists to lead the government-controlled media.“The president was not happy with how Moyo handled the Gono-Kereke (Gideon Gono and Munyaradzi Kereke) fight. He took sides and as you remember, there was a story which was written by The Herald when Gono hired Tendai Biti to represent him in the Constitutional Court, an unnamed military source was quoted in that story, but from the intelligence report, no one from the military spoke on the issue. It was fabrication . . . The story did not please the president and Moyo was advised about the issue. Instead, the public was fooled through a dubious suspension of the editor. It was a smokescreen and the president was very aware of the mischief,” the source said.The source added: “Furthermore the president was not pleased with how the Zanu PF provincial elections where handled in the state media and the involvement of the minister in party issues. If you recall, the Mashonaland Central provincial elections had some challenges, but the minister jumped the ship and acted as if he was the party spokesperson when he is a government minister.“A comment was penned in The Herald attacking a certain senior minister describing him as a ‘short man in huge robes’ and from intelligence reports, the comment was not written by the said editors, but from the ministry.”The sources said during the meeting with Mugabe, Moyo tried in vain to explain himself just as he did during the politburo meeting last week.The minister, the sources said, was left with no option except to apologise to the president.“The other issue which has been of concern to other ministers and the president himself is that Moyo is meeting ambassadors at his offices and has met more ambassadors than those met by the ministry of Foreign Affairs,” the source said.“And in those meetings, there were no intelligence officials.”

According to sources, Moyo wanted to reshuffle the entire editorial team at The Sunday Mail.At Shamuyarira’s funeral, Mugabe accused Moyo of working to divide Zanu PF from within and using his intellect to set party leaders against each other. Allegations against Moyo were first raised during the party’s politburo meeting last week.