A 52-YEAR-OLD polygamist who decided to celebrate Christmas with his family in Gokwe after having disappeared for three years, will live to regret having deserted his third wife in the first place after he got stuck on her while they were making love. The incident which took place at Matanganyika Village shocked all and sundry, as ulunyoka – the “fencing” of one’s wife – is usually done to punish men who bed married women. 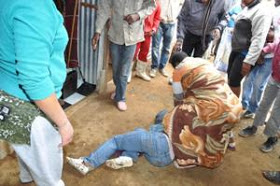 A source close to the developments told Sunday News that the man, Mr Obert Mleya who originally is from Binga came for Christmas after living for almost three years in Harare.

“Mr Mleya opted to fulfil his third wife’s conjugal rights but this backfired when he was stuck to her for the whole day. Both families were now trading insults with the man’s family accusing the wife of being a prostitute yet the wife’s family claimed that their daughter was no longer married,” said the source.

“The matter had to be referred to Chief Njelele to intervene. The chief had to calm tempers and urged people to first resolve the matter at hand and later discuss their family issues. His (Chief Njelele) intervention worked because the man was unlocked.”

Mr Mleya’s third wife Siphiwe Ndlovu’s brother, Robert, refused to comment on the matter but later said the issue was only meant to be discussed by family members and not the general public.

“I don’t want to comment on that. If the matter happened, then where do you benefit? Some of these issues are meant to be discussed by family members,” he said.

A Mr Mpofu, who reportedly “fenced” Siphiwe is said to have claimed that he had the right to do so as he had been taking care of her for the past three years. He said by “fencing” her, he was only protecting his “wife”, which is common in the area.

“Stories travel fast but I am not shy to share the information with you because it passed,” said Mr Mpofu, “the wife is mine and we have a kid together but what happened shocked me. We will sit down as the family and see what is the way forward.”

Chief Njelele also confirmed the developments but said his court does not deal with such complex cases.
“The matter came to our court but we did not deal with it in the manner in which it was presented. The man’s relatives wanted to sue the person who had locked his wife but there was nothing we can do about it.

“However, we only managed to encourage the man who had locked her to unlock them. The man was not present at our court, some of his relatives who represented him promised to pass the message. The family has not yet approached me again so this might be a sign that everything is now in order,” Chief Njelele said.