Warning: include_once(): Failed opening '/home/content/p3pewpnas04pod08_data06/45/41906345/html/wp-content/plugins/wp-super-cachewp-cache-phase1.php' for inclusion (include_path='.:/opt/remi/php73/root/usr/share/pear:/opt/remi/php73/root/usr/share/php:/usr/share/pear:/usr/share/php') in /var/www/wp-content/advanced-cache.php on line 20
 Truck driver got more than what he bargained for when a prostitute soiled his blankets during S*X | Zimbabwe Latest News
Saturday, February 27, 2021 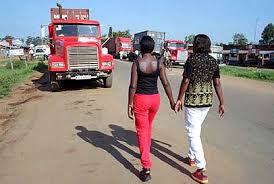 A truck driver got more than he had bargained for when a prostitute soiled his blankets during s*x in car. The incident was a crowd puller with the truck driver fuming and demanding his money back, B-Metro has reported.

It became a serious issue because as the trucker was insulting the thigh vendor, club security became involved. A bouncer at the leisure centre, who identified himself as Tshuks, said the woman pleaded for forgiveness, saying she had been suffering from a running stomach which she had abated.

However, the driver took note of it and demanded his US$10 and drove-off.

One of the night rollers – women who solicit outside the nightspot – knows why the woman soiled herself.

“She had diarrhoea during s*x and soiled her client’s blankets. The man forcibly shoved her out of the vehicle with the blankets,” said a witness.

Her friends at the red-light district explained why the s*x worker had a running tummy.

“She attended a friend’s birthday party where she had too much to eat and drink. Given how drunk she was, we thought she would go to bed,” said one of her colleagues.

Instead of going home, it is said she decided to join them in their trade. It was at that time that she enticed the truck driver. They allegedly got into his foreign registered vehicle where in the middle of enjoying the pumping game, all hell broke loose.