The Elders, an independent think-tank of global leaders founded by Nelson Mandela have called on leaders in the southern Africa region to support a smooth transition in Zimbabwe.

According to the group, leaders of the Southern African Development Commission (SADC) during their 36th summit should, ‘‘consider how best they can support a successful and inclusive transition in Zimbabwe.’‘

They contend that only a peaceful transition in the country will ensure that the country can return to stability and back on the path of economic growth.

We firmly believe that a successful transition is vital not only for Zimbabwe but also for the region, we are also convinced that, if the transition process is to succeed, it must be inclusive, transparent and framed in the national interest.

According to them, Zimbabwe was on the verge of an important transition which needed to be handled properly hence their call on the SADC to play a role.

“We firmly believe that a successful transition is vital not only for Zimbabwe but also for the region […] we are also convinced that, if the transition process is to succeed, it must be inclusive, transparent and framed in the national interest,” the Elders stated. 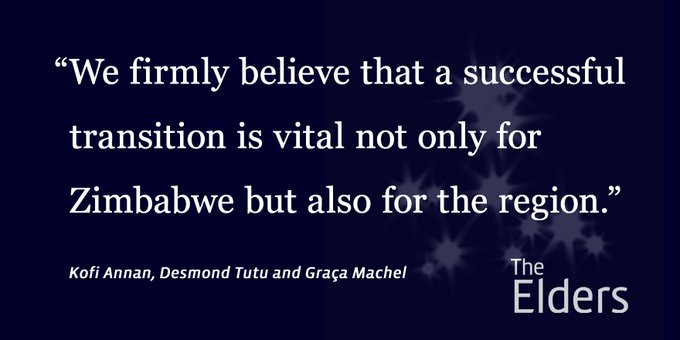 A letter from the group co-signed by Kofi Annan, Chair of The Elders, Archbishop Desmond Tutu, an Honorary Elder, and Graça Machel, the co-founder with Nelson Mandela, urged the SADC leaders to reflect on how best to help Zimbabwe manage the complex challenges ahead.

Since June this year, Zimbabwe has experienced a series of protests against the economic policies of the government. The country is experiencing critical shortages of cash, especially the United States dollar. Protests continue against plans by the government to reintroduce bond notes as legal tender.

The government have been unable to pay civil servants as scheduled in the past two months. Social media activists described as ‘cyber terrorists’ have succeeded in organizing protests that have often been broken up by police using batons and tear gas.

The Zimbabwean government is drafting a law to penalize “abusive” usage of social media with five-year jail terms.

Who are ‘The Elders’

According to their official website, ‘The Elders’ are an independent group of global leaders working together for peace and human rights.

The group was founded by iconic anti-Apartheid leader and former South African President Nelson Mandela, they represent an independent voice, not bound by the interests of any nation, government or institution.

It is currently Chaired by Kofi Annan, with Gro Harlem Brundtland, the first woman Prime Minister of Norway as Deputy Chair of The Elders, other distinguished members include Archbishop Desmond Tutu, Jimmy Carter, Lakhdar Brahimi, Mary Robinson, Graça Machel amongst others.